The Wednesday Hodgepodge is courtesy of From This Side of The Pond.

1.  I recently read here about four secrets to happiness from around the world. They were: Overcome your fears by facing them head on, allow yourself to relax and reset, work to live versus living to work, and find the good in life. Not sure if these are the actual secret to happiness, but which of the four do you struggle with most? Which one comes most easily to you?
Relaxing.   In those few moments when I don't absolutely have to be doing something, it's hard to know what to do.   And I'm not much good, either, at recognizing that sometimes the most important thing I need to do is to put aside the pile of infinite work and just relax and reset.   I've gotten slightly better over time, but only slightly.
2. How would you spend a found $20 bill today?

Probably would just put it in my wallet and move on.   I'm not rich, by any means, but God has provided us with a whole lot more than we need to live.   I wouldn't feel a compulsion to go out and spend $20 just because it landed in my hands.
3. Ego trip, power trip, guilt trip, round trip, trip the light fantastic, or trip over your own two feet...which 'trip' have you experienced or dealt with most recently? Explain.

Guilt trip, probably.   Sometimes I try to plan activities because I feel like it's expected of me, and so I put a guilt trip on myself.  False guilt, absolutely.   But it's there.
4. If you could master any physical skill in the world what would it be, and how would you use that skill?
Playing the guitar.   I'm a good piano player already ... but pianos aren't terribly portable.   Sitting around with people and playing the guitar and singing songs is a skill I've long admired.
5. As July draws to a close, let's take inventory of our summer fun. Since the official first day of (North American) summer (June 20th) have you...been swimming? enjoyed an ice cream cone? seen a summer blockbuster? camped? eaten corn on the cob? gardened? deliberately unplugged? watched a ballgame? picked fruit off the vine? taken a road trip? read a book?  Are any of these activities on your must-do-before-summer-ends list?
Swimming?   Nope.   The only opportunity I had for that was during our camping week in the UP, and Lake Huron was still way too cold.

Summer Blockbuster?   Probably ... not sure when I saw Jurassic World with the family, but it might've been in that time range.   We'll be going to see Ant-Man "soon".

Camped?   Depending on your definition.  Our version of "camping" is dorm-style housing at a UP Christian campground.

Gardened?   Nope.   My dear wife takes care of that.

Deliberately unplugged?   Yep ... that was our week of camping up north.

Watched a ballgame?   I've watched a few on TV, but only while doing other chores.   (Remember that thing about not knowing how to rest?)

Read a book?   I actually did read a couple of books up at camp, and am starting a favorite series of mine (Richard Bolitho) over again.
6. The Republican Presidential candidates will debate on August 6th. What's your question?

Give me a balanced budget plan, please.   Not rhetoric about "we'll cut spending in some areas to eliminate waste and fraud" that never actually amounts to anything.   Show me where you're going to make the hard choices.   (I'd ask the same thing of the Democratic candidates.   Of course, neither group will answer.)
7. What's your most listened to song so far this summer?
I don't listen to music on the radio much, so ... I don't really have a "song of summer".
8.  Insert your own random thought here.

A dear colleague, Reg Bell, passed away last week.   Reg taught chemistry at Kettering for, oh, 52 years straight.   He loved his job, and he loved his students.   His final illness came on rather suddenly, even as he was preparing to begin his 53rd year in the classroom.

Watching the campus (and the extended network of alumni) grieve Reg's death is a curious phenomenon.  Everyone reacts to grief in different ways.   There's a strong desire to make the "perfect" memorial --- almost as if getting the memorial just right will bring our loved one back to us, or at least ease the pain of the loss.

Reg's funeral was yesterday --- a small, private affair, as the family requested.   (The thousands of people who would want to attend the funeral would've made any public affair impractical.)   Today, I went to visit his grave.  Right now, it looks like most new graves; there's not been enough time to make a proper headstone.   (Frankly, I wasn't sure it was his grave, until I received confirmation later in the day.)  With just the grave, and a simple wreath, the place seems ... lonely, somehow. 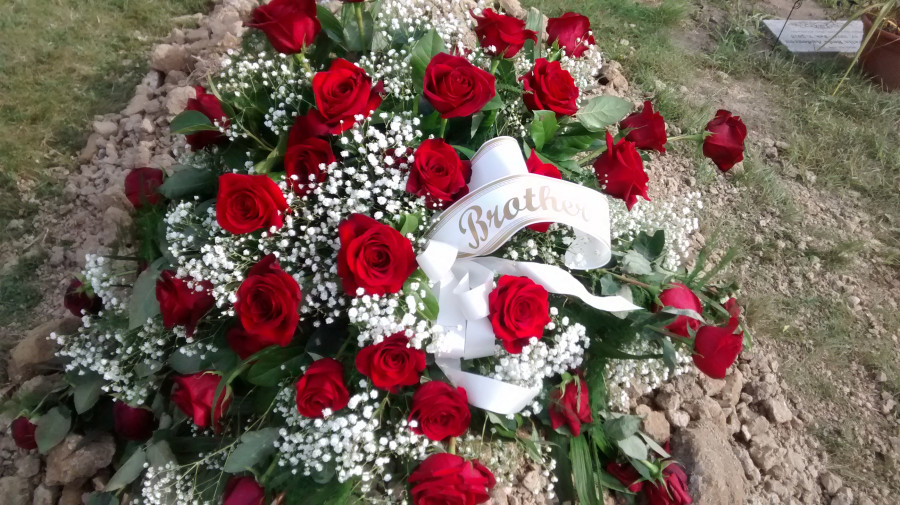 A public celebration of Reg Bell's life will be held on October 23rd.   My students (who are much smarter than I) have pointed out that October 23rd is Mole Day.   I think this would please Reg to no end.